Most and Least Popular Colors on Web Pages

If someone asked you what the least commonly used color on web pages is, how would you answer? Although it sounds like a fairly simple enough question to answer, there is actually more to it than meets the eye.

First of all, the colors that are truly the least used are those that are not used at all. How many colors fit this criteria, not being used even once on the entire Internet? Obviously, it is almost impossible to answer that question definitively.

So the next logical contender would be a color or colors that are used only once across all websites on the Internet. How many fall into that category? 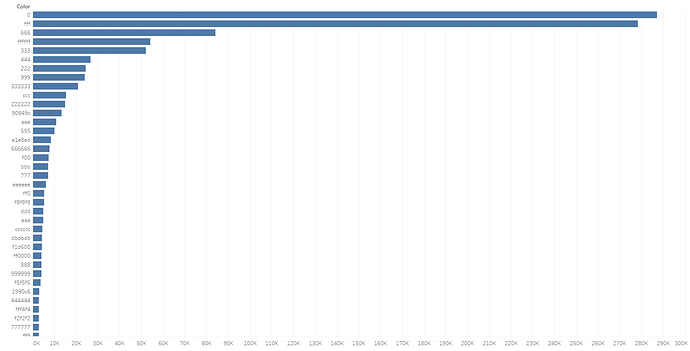 One researcher performed a search for all color hex strings he could find in all CSS files on the Internet. He came up with a total of 1,728,903 unique colors. Next, he ranked them by the number of times they appeared or were used on a website. Of the 1,728,903 unique colors he searched for, 604,286 were used only one time. In other words, all 604,286 colors were tied for last place!

Another researcher built on the progress of the one who went before him. By analyzing the first researcher's results, the second researcher reduced the list down to 125 of the most popular colors. As you would expect, colors in the white, black, and gray spectrums dominated the top of the list, along with moderate reds and blues. At the bottom of the top 125 list was neon pinks, purples, and greens. Since few websites would likely use such bright colors, these results are probably not all that surprising. Nevertheless, it is interesting to note such patterns when you start crunching the numbers.